How long have bonsai existed? Unravelling their history takes us to China approximately 1300 years ago.

Bonsai are a Japanese cultural tradition. Their origins and sources can be traced back some 1300 years to a painting on the wall of the inner chamber of the tomb built for Prince Li Xian. In this painting, there is a line of people, one of whom bears a bonsai in a shallow pot (tray), carrying it in both hands to present it to the Prince. In the pot are two rock-like lumps, both of which have plants cascading from them that seem to be in bloom. This image shows us there was a firmly rooted cultural love of potted plants in ancient China prior to the emergence of the word “bonsai”. 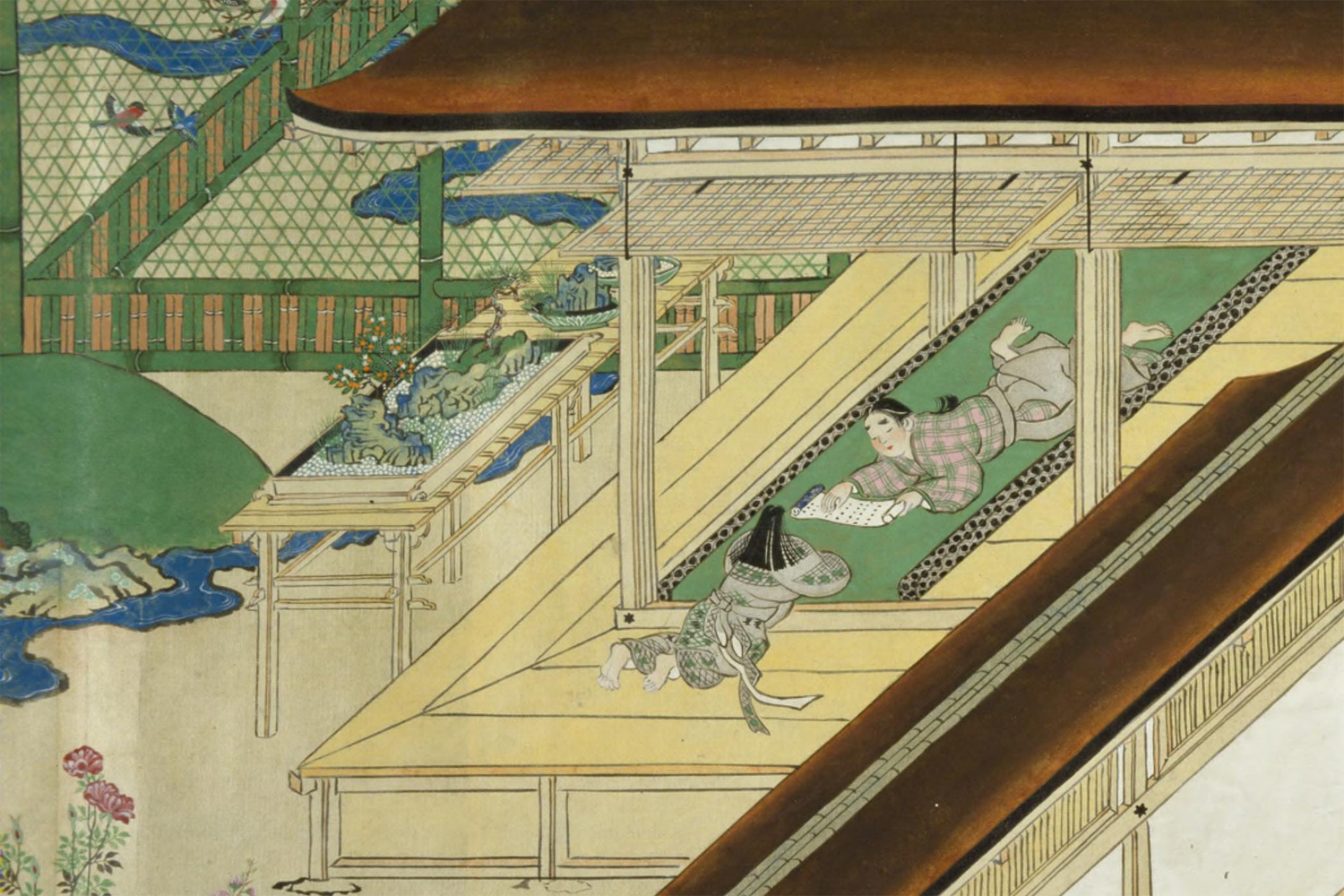 The oldest image of a bonsai in Japan can be seen in a scroll created about 700 years ago, after the Kamakura Period. It is said that the bonsai shown in Legends of Kasuga Shrine, which depicts the origins of the Kasuga Shrine, is a typical example of a bonsai.

Following the Kamakura Period, the creation of folding screens flourished from the Muromachi Period to the Edo Period, with some depicting bonsai. Furthermore, in the eighth year of the Keicho Period (1603), there is an entry for “bonsan” in the Japanese/Portuguese dictionary written in the Portuguese language by Portuguese missionaries from the Society of Jesus. Bonsan were extremely popular among the families of the Muromachi shogunate, priests and so on, with sculpted objects representing landscapes based around rock forms; the dictionary entry corresponds with the images of bonsai on folding screens from this era. The bonsai depicted on the folding screens were known as bonsan. 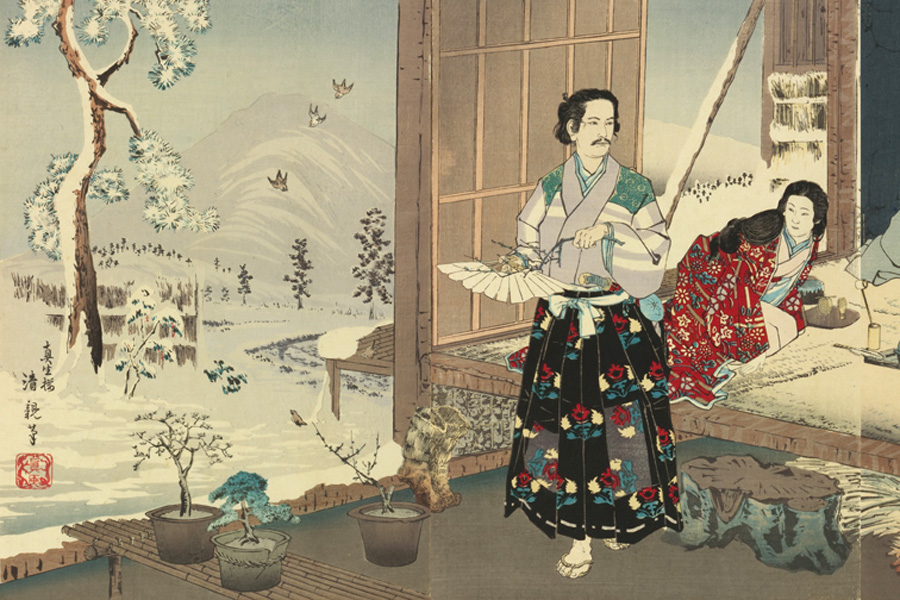 The Momoyama Period gave birth to the Noh play Hachinoki, a significant legend communicating the history and culture of bonsai. In the play, a priest traveling through the snow is given shelter for one night by an old samurai who has fallen on hard times. It includes a well known scene where, due to the lack of firewood to keep away the cold, the samurai cuts his beloved potted plum, pine and cherry trees into kindling. This play, which stems from medieval times, has become deeply rooted in Japanese culture from recent times to today. 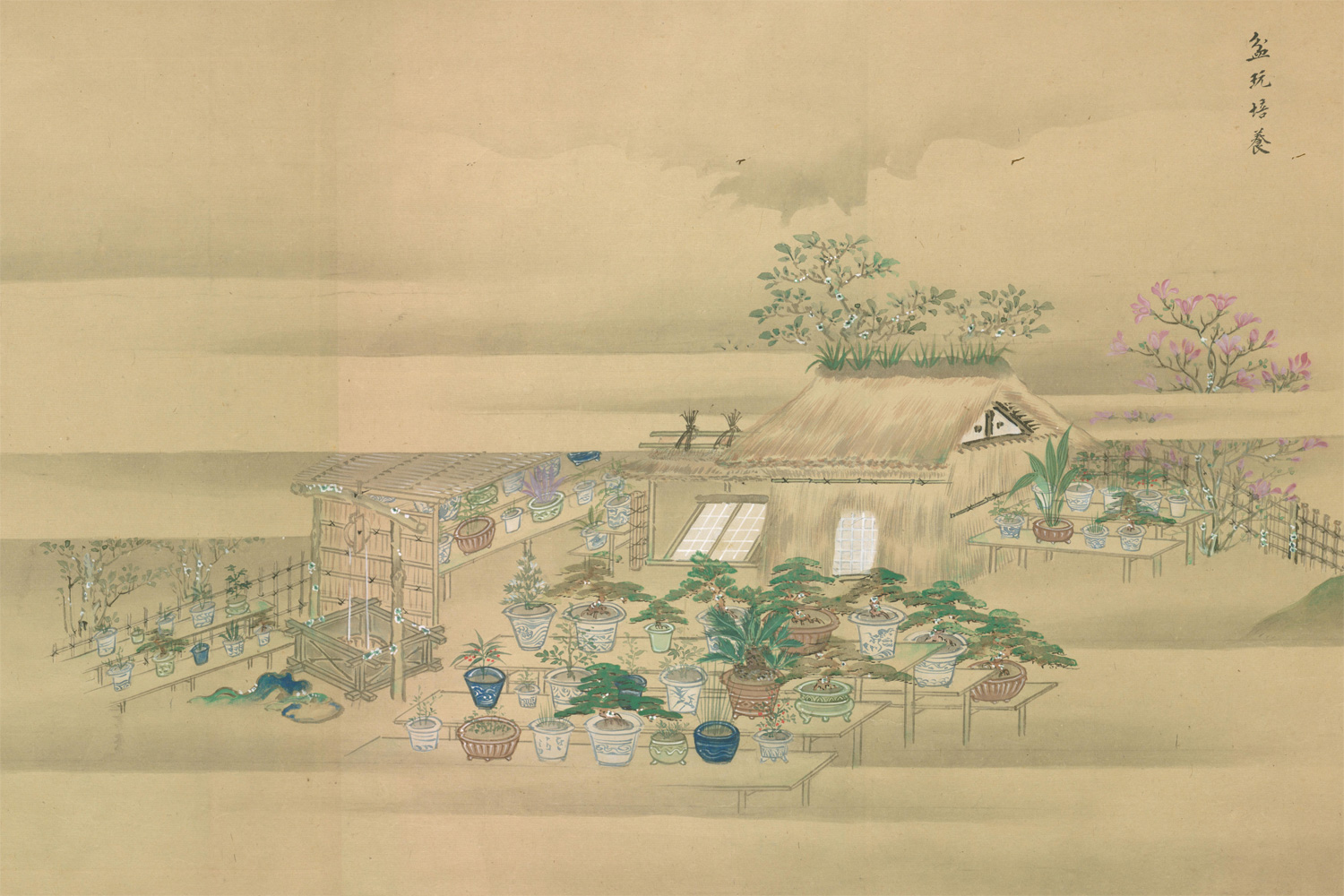 During the Edo Period, daimyo gardens came to be built within the grounds of daimyo mansions, and bonsai could be seen there. Until this time, owning and caring for bonsai was limited to the upper classes. However, at the end of the Edo Period, it was becoming a hobby for ordinary people, and the ukiyoe prints of the time depict people enjoying mainly flowering bonsai in the narrow gardens of tenement houses.

At the start of the Meiji Period, the bonsai that we know today, along with the word to describe it, came into being. Political and business circles in particular spawned great numbers of bonsai fanciers, and residences were fitted with special places for bonsai display, western-style greenhouses for horticultural use and so on. Furthermore, bonsai came to be displayed within the daimyo mansions.

On the other hand, bonsai culture also infiltrated the cultural cognoscenti. The great writer of the Meiji Period, Natsume Soseki, wrote of bonsai in his novels The Poppy and To the Spring Equinox and Beyond.

During the Meiji Period, bonsai crossed the seas to be displayed at the Great Exhibitions in Western Europe. In the sixth year of the Meiji Period (1873), at the World’s Fair in Vienna – the first time the Japanese government participated in such an exhibition – and at the 1878 International Exposition in Paris, bonsai were displayed as part of Japanese gardens constructed outdoors.

During the Taisho Period, bonsai were recognized as an art form and the idea was born to popularize them worldwide. Driving the “bonsai art campaign” which continues through to today was bonsai researcher Kobayashi Toshio, the chief editor and publisher of the specialist magazine Bonsai which was published in the Taisho Period. Kobayashi maintained that bonsai was not merely a horticultural pursuit but an art form in the same class as painting or sculpture that deserved official recognition, and campaigned for an exhibition at one of the “art galleries” that had been established in the Meiji Period as a sanctuary for Western art. This movement which caught up the entire art world resulted in The Kokufu Bonsai Exhibition taking place in the ninth year of the Showa Period (1934) at the Tokyo Prefectural Art Museum (now Tokyo Metropolitan Art Museum). The same exhibition continues to take place at the same venue each year.