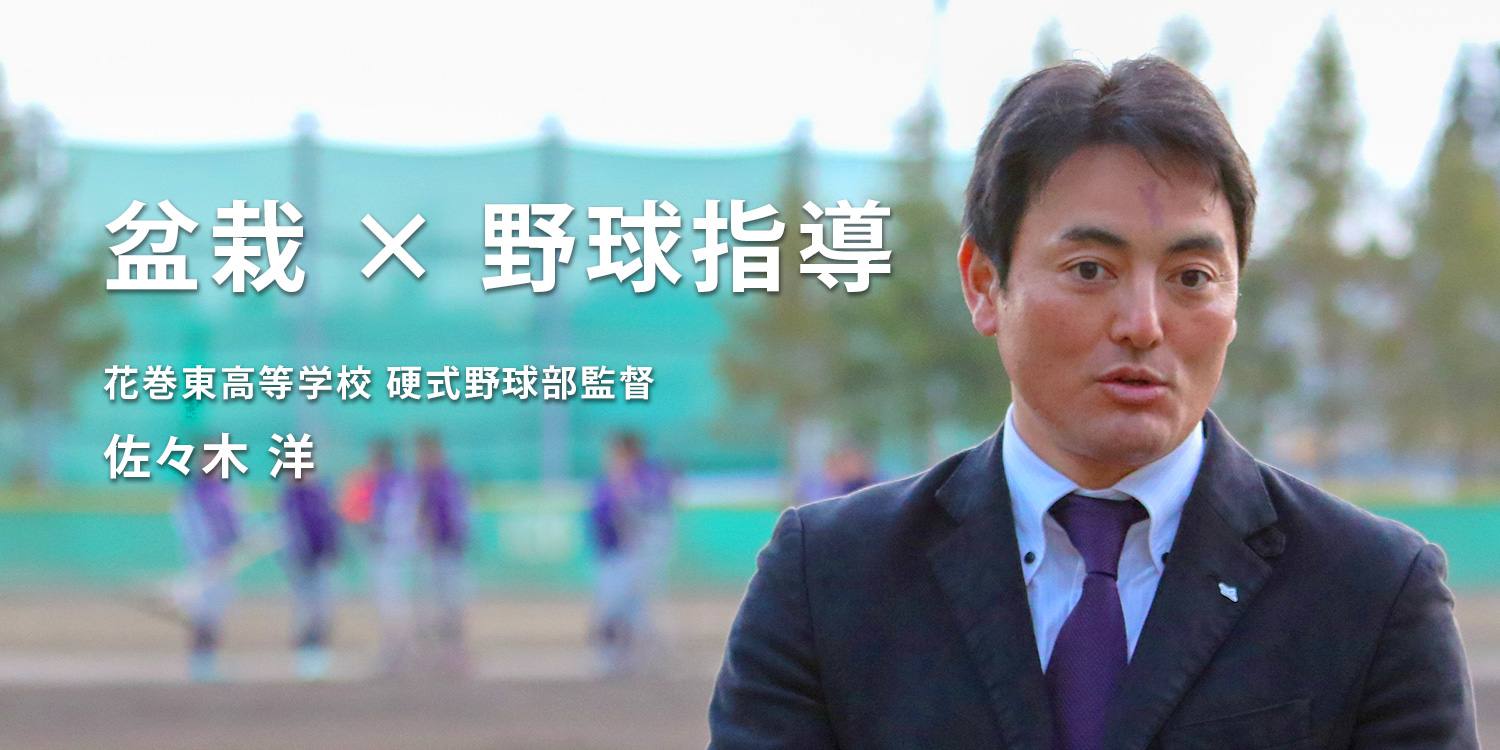 Hanamaki City, situated in the midwestern part of Iwate Prefecture in Japan, is famous as the birthplace of Wanko Soba (soba noodles served in small bowls) and the birthplace of novelist and poet Kenji Miyazawa. On hearing the name of the city, however, a lot of people these days associate the area with Hanamaki Higashi High School which has produced two Major League Baseball (MLB) players–Shohei Otani and Yusei Kikuchi. We found Hiroshi Sasaki, coach of the school’s baseball team, is bonsai hobbyist. Coaching young people and growing bonsai…do they have anything in common? To satisfy our curiosity, we headed to Hanamaki.

Sasaki is renowned not only in Japan but also in the US–the home of baseball–as a coach who delivers results using his flexible, innovative approach. In Japan, most high schools with a strong and prestigious baseball team recruit outstanding players from all over the country. This does not ring true for the Sasaki-led Hanamaki Higashi team. By sticking to the principle “Made in Iwate,” the team comprises only players from within Iwate Prefecture. This approach may be feasible in metropolitan areas such as Tokyo, Osaka, and Nagoya, but Iwate Prefecture has a comparatively small population of only 1.2 million. Iwate does not seem to be the ideal place for discovering talent. So, why is Hanamaki Higashi so strong? What are the secrets the team uses to enable their players to grow and develop? Where do the concepts of bonsai fit into the picture? We started off by asking Sasaki how he started playing baseball–his own journey.

In my younger days, baseball was just about the only sport available to boys. My older brother and I used to go to a local park with a plastic bat and played baseball. I played baseball throughout middle school, high school, and university. I wanted to become a pro, but back then I was too ashamed to confidently say that. Looking back, I didn’t have a concrete action plan for becoming a pro, so it’s only natural that I couldn’t produce results. You won’t go anywhere if you don’t set clear goals, make plans, take action, and check on these regularly.

Sasaki was born the second son to a farmer. He started playing baseball and over the course of things aimed to become a pro, albeit vaguely. After experiencing setbacks as a player, he gave up pursuing a career as a baseball player and instead chose a path to become a coach. What influenced him greatly during this process was one of his teachers from his years at middle school.

I’m embarrassed to tell you this, but I was a bit of a bad boy at middle school. The school bully, you might even say. But because of one teacher who gave me responsibility, I decided to put away my ‘creative’ (and prohibited) take on our school uniform and straighten up. Interestingly, I don’t recall getting scolded by that teacher. The teacher was probably putting bonsai-like “invisible wires” around me for “training.” Without this teacher, I would not be who I am today. 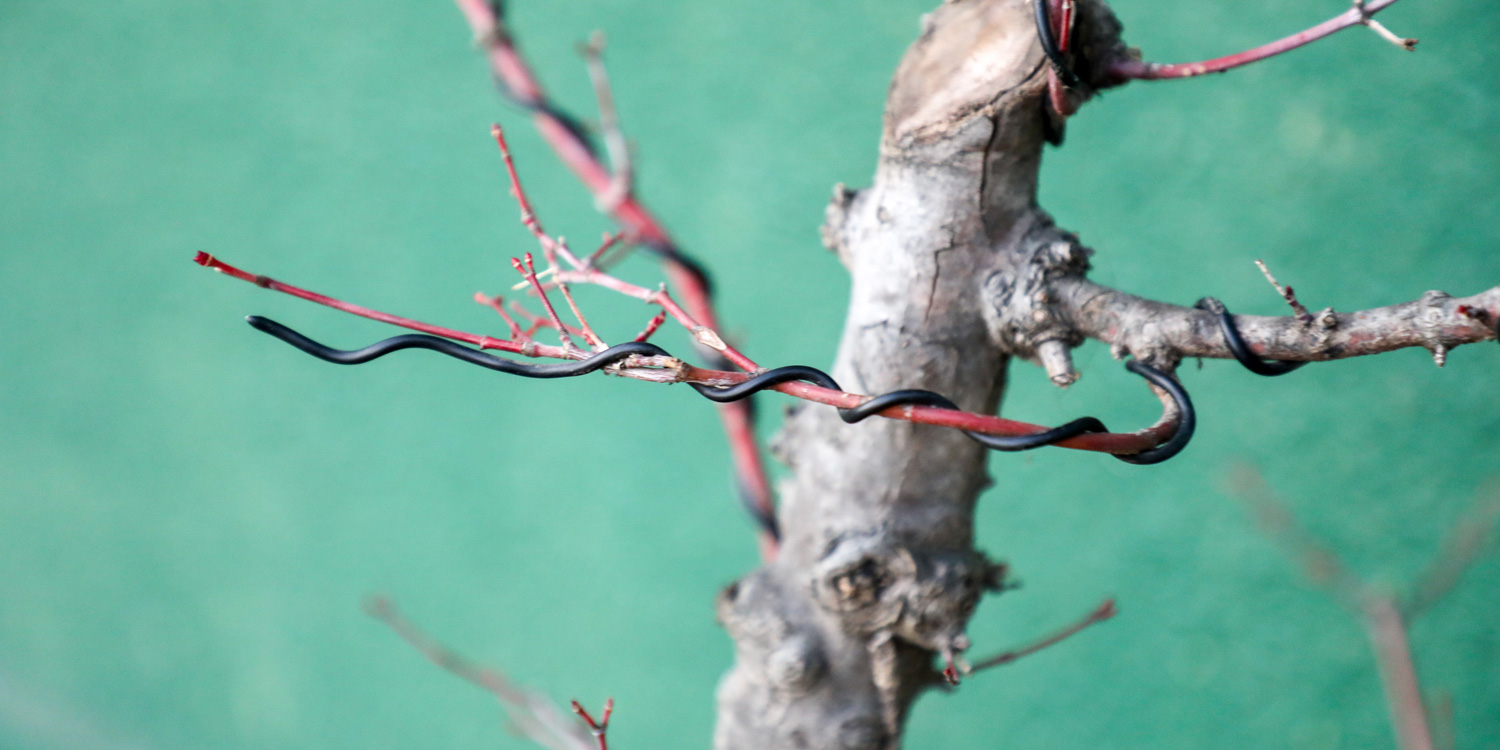 In the world of bonsai, the natural bends and growth of the branches are manipulated to form trunk patterns and adjust overall tree shape. This technique is called wiring or training. Bonsai uses actual wires, but in education, I believe that it is important to put “invisible wires” on students. You can guide students, without them realizing it.

When I saw bonsai plants for the first time, I first wondered why they grew so beautifully. On having a closer look, I could see that the plants had wires wound around them–apparently so that they could form beautiful shapes in the future. Humans, too, need to be wrapped in virtual wires when they are young. Olympic athletes start training when they are very young, and it’s hard to find top athletes who started their sport at the high school level. Those elite athletes were made to wear “invisible wires” at a very young age–when they were still capable of flexibly absorbing what they learned. We live in an era when much emphasis is placed on individuality and autonomy, but “training,” provided it is done correctly, is also important. The younger the kids, the better, if you want to guide them.

Sasaki went straight to the heart of the matter, but how did he get interested in bonsai in the first place? Let’s turn back the clock by 10 years.

In 2009, Hanamaki Higashi made the finals and semi-finals at the spring and summer tournaments of the National High School Baseball Championships, respectively. In the same year’s draft, the team’s ace Yusei Kikuchi was named as a No. 1 pick by six Japanese pro teams. Suddenly, journalists from magazines and friends I hadn’t heard from for years started calling me since I was coach, saying they wanted to introduce me to someone. They probably thought they could make money off of their relationship with me in some way. I gradually grew tired of meeting up with people and started just keeping to myself. In hindsight, I think I was a bit depressed. Even when I went out for the occasional drink, people would start rumors that I was rolling in cash and going bar-hopping every night…

That made Sasaki even more anxious about going out in his own free time and he ended up starting to go to bed and waking up early. He is from a farming family and had inherited a plot of land from his parents. Having this land, he thought it might be a good idea to take up gardening as a hobby.

I bought some young trees from a local home improvement center and planted them in the garden. I placed the trees in the ground without much thought, and as they grew, they started competing with each other. There wasn’t enough space between the trees and I eventually had to re-plant them.
I tell my students to think about the long-term…but I forgot to follow my own advice!  While gardening, I developed a tendency to look for ideas and concepts that could be applied to education and baseball coaching. One day, I thought: “Like trees, students ‘spaced too closely’ may interfere with each other and prevent each other from growing.” A lot of other thoughts crossed my mind, too. I planted only the trees I liked–deciduous ones–and when fall came, all of the trees lost their leaves. All I could see in my garden was bare trees (chuckling). My father was laughing at me, and explained why it is better to plant a variety of trees such as cherries, pines, and maples.” 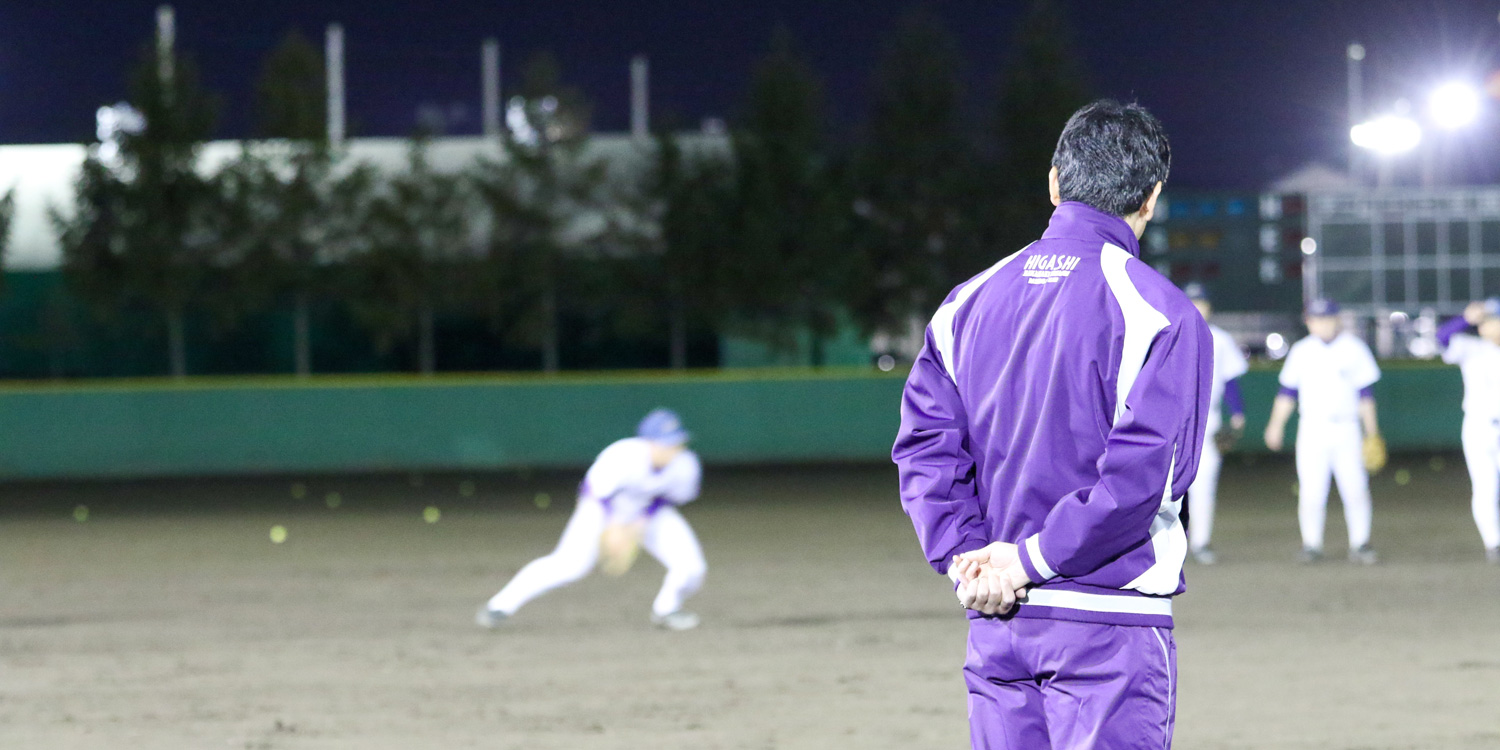 That’s when Sasaki realized the values of individuality. Some trees blossom in spring and others become attractive in fall–you must think long-term to make a garden. He applies this concept to baseball.

My team used to have many players of a similar type. When we lost a game by 1-0 at a national championship, we had a line-up consisting mostly of left-handed batters with nearly identical styles. This approach may work wonders in particular situations, but in this game, one batter failed as did all subsequent batters after him–because each player had difficulty facing the same type of pitcher.
In a sense, high school baseball requires more professionalism than professional baseball itself. You can’t lose a single game between the preliminary rounds and the finals. A pro team might lose 60 games but could still win the season. In high school baseball, there’s no playoff–lose one game, and that’s it. We can’t risk playing the type of baseball where you lose a game because of a single player not performing.

Sasaki learned from gardening the importance of fielding not only players with high batting averages but also players with a high on-base average. Sasaki continues:

Once I secretly transplanted a large tree from my parents’ garden next door to my own garden. It died soon after. I confessed the deed to my father and he told me, happily amused, that the timing of my transplanting was off. I transplanted the tree in summer but it should ideally be done before the early-summer rainy season. After learning from this, an idea suddenly crossed my mind–giving guidance to students at the wrong time might also do them harm…

Profile
Hiroshi Sasaki
Born in 1975 in Iwate Prefecture. Upon graduation from Kokushikan University, he started teaching at Yokohama Hayato High School where he also coached the baseball team. He moved to Hanamaki Higashi High School in 1999 and was appointed the coach of the school’s baseball team in 2002. As of January 2020, he has led the team to the National Championships (“Koshien”) a total of nine times (spring and summer tournaments combined).

【前の記事】
Spress Media Publishing Co., Ltd.【次の記事】
What do bonsai and baseball coaching have in common?<2/2>
The following two tabs change content below.