Sasaki tends to apply everything to baseball coaching–that’s why he comes up with a lot of new ideas. He has still more gardening-related episodes to share with us.

2/2: Learning from the laws of nature

With a new perspective, things start to look different

Gardeners are known to sit on their verandah and view the whole garden while drinking tea. Thinking about this I realized that through this seemingly insignificant act, they are actually surveying the garden from a “bird’s-eye view.” In baseball, it’s important for a coach to do one-to-one fungo practice, like you see in teen TV dramas. I wondered about combining this with how gardeners see things.
We have capable assistant coaches so I let them do the coaching and I observe the practice session from a higher spot, as if I were a gardener sitting on a verandah. When I hit a fungo, for example to the shortstop, I look at the shortstop only. But if I observe the same practice from a higher location, I start noticing what other players not receiving the ball are doing. “What ARE those right fielders doing?” (laughing). I think this is a very important perspective to have for a coach.

With a different perspective, things start looking different–this applies to life outside baseball as well.
Back to gardening, and the fun fact that maple trees are Sasaki’s favorite. He wheedled his father to give him one and look what happens…

One day, he came to me with a maple tree seedling in a pot. I said “No, no, I wanted a big maple tree!” to which he replied “Don’t be silly! It’s small because it’s planted in a pot. It will get bigger if you transplant it.” That was a revelation–it’s the same for humans. A person stays small if kept in a small “container” but grows bigger if given a chance to be in a large one. In baseball, I need to put the students in a container appropriate for each point in time.
It’s not easy to explain logically, but if you liken a container to a goal you set, I believe it’s effective to set a goal slightly bigger or higher than the one you want to achieve. If I told a pitcher to aim for 160 km/h, I feel he would likely to reach 158 km/h at most. In fact, as coach, he gave this advice to his high school pitcher, Shohei Otani. Sasaki told Shohei to aim for 163 km/h. But in anticipation of his coach’s expectations, he had already put up a “Goal: 163 km” sign in the school’s weight training room. Should Shohei’s success be attributed to great coaching or his unmatched talent? In either case, this episode tells you that top performing people think differently.

An interest in bonsai

Once his garden was complete, Sasaki did not have anything to do in his free time. That was when his interest in miniature potted plants, or bonsai, started. Principally, he buys ready-made bonsai plants for appreciation. He does not have enough time to look after his plants with his demanding duties as a Japanese history teacher and a baseball coach. He also is away from home for many days when the team is on the road. Occasionally, and sadly, his plants die… 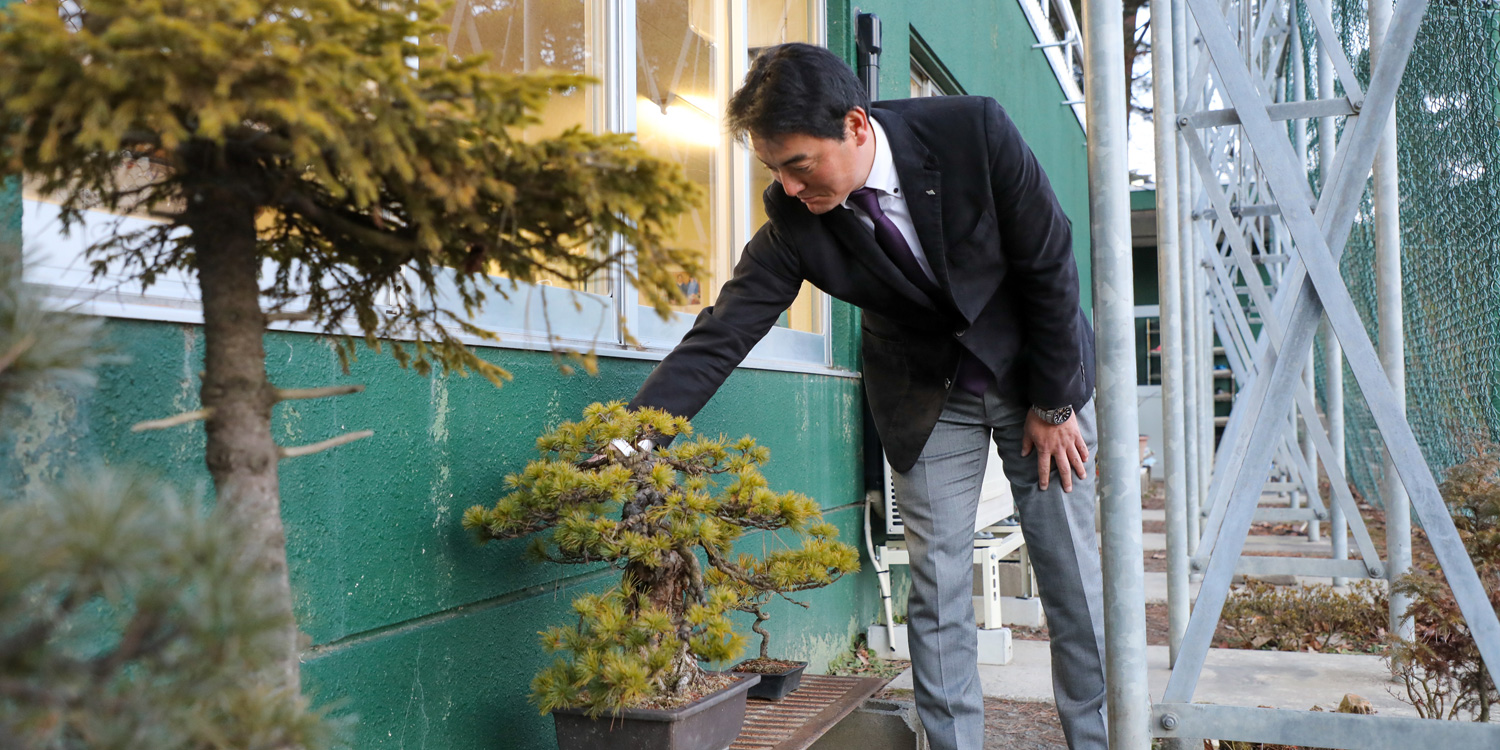 We have bonsai plants behind the backstop on the school grounds. I water them in the morning. In the beginning, the plants died on me. Of course, they died because I watered them all in exactly the same way. So, I started watching DVDs to learn how to look after bonsai. I laugh at myself now, because this is so like me. But it’s okay to make mistakes. We can learn and grow a lot from our failures.

From garden trees to bonsai–Sasaki never loses interest. He says he learns a lot from nature.

Sense of beauty ingrained in the Japanese mind

Traditionally, Japanese people have a strong sense of appreciation for nature. We also have a mentality that sees values in things other than economic affluence, such as pride and reasons for living (“ikigai”). But recently, I feel this way of thinking is dwindling, and we are obsessed with Western culture. Japanese tend to think of bonsai as a hobby for the elderly, but I heard that in the West, bonsai are also popular among younger generations. In fact, a lot of foreign tourists visit Kyoto to see famous Japanese gardens. What’s happening now is that the people in the West are increasingly interested in Japan’s ancient traditions, while Japanese people seem to be losing interest in them. Placing myself in nature helps me to reaffirm the sense of beauty ingrained in us Japanese. I think just having something natural in our living environment makes us recollect and appreciate a lot of things that we have forgotten. People living in a small apartment can still have contact with nature, such as through tiny bonsai plants. I take my hat off to Sasaki’s passion for baseball coaching as well as his attitude of trying to learn from anything. Nowadays, not just bonsai, but even rocks inspire him to think about the commonality between the laws of nature and baseball coaching. We look forward to hearing about Hanamaki Higashi High School Baseball Team’s further successes in the coming years.

Profile
Hiroshi Sasaki
Born in 1975 in Iwate Prefecture. Upon graduation from Kokushikan University, he started teaching at Yokohama Hayato High School where he also coached the baseball team. He moved to Hanamaki Higashi High School in 1999 and was appointed the coach of the school’s baseball team in 2002. As of January 2020, he has led the team to the National Championships (“Koshien”) a total of nine times (spring and summer tournaments combined).

【前の記事】
What do bonsai and baseball coaching have in common?<1/2>【次の記事】
japan-bonsai.jp has been released.
The following two tabs change content below.