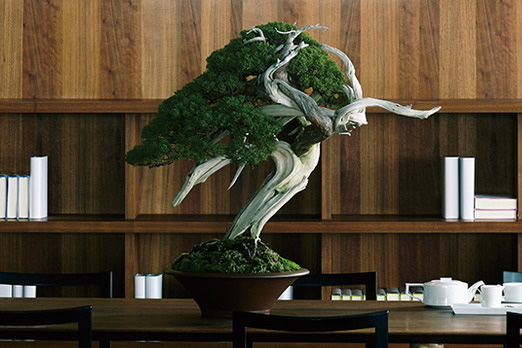 Takahiro Kato, the fifth generation of Manseien Omiya bonsai / vine vineyard that has been around for over 170 years. Bonsai is the beauty of inheritance, and the culture surrounding bonsai is also inherited. Mr. Kato, who should know the weight of the bonsai, asks whether he is really good with the current bonsai.

First of all, my way of thinking. Living things, human beings, the most unnatural beings in nature. The emergence of this aesthetic sense of human nature, especially vegetation, is the beginning of bonsai. There, there is a coexistence between the direction of pursuing the “essentiality” of noticing and sublimating the essence of trees that live in the natural world more faithfully, and the more emphasis on the ideal form for trees that humans think. You. Bonsai is a natural beauty created by humans, so this coexistence is inevitable. My intent is to seek “ness”.

Takahiro Kato’s story is profound. It is meaningless if you do not face bonsai on the premise of natural beauty that humans think. Bonsai is a form of self-desired appearance, like drawing a picture, and it is important how it is embodied.

The sense was sharper in the past. Because we observe nature, learn it naturally, and pursue its “ness”.
I think I have a lot of The Kokufu awards, and I think I’m doing orthodox. If I don’t be afraid to misunderstand, is the bonsai at the Kunitachi Exhibition really good? Do those who are keen on the art sense look at the bonsai at the national style exhibition and feel impressed, comfortable, and comfortable? I think poor. That’s the current problem and I think we need to solve it. Of course there is business and there are signs, so we need the current route. But if you don’t accept bonsai that isn’t so, you can’t do it. Not everything is free. After all, academic accumulation is necessary, and it is a story based on that.

Mr. Kato says that bonsai won’t go ahead just by receiving the kokufu award and the prime minister’s award. Now, the aesthetics of what bonsai is is required. Is it “sellable = good”? か Is that feeling getting stronger? Is that a dead end? That’s why we don’t stop, we’ll return.

Mr. Kato also puts a special thought on how to enjoy bonsai.

The pattern in which enthusiasts start bonsai is that they first become interested in bonsai, meet their favorite bonsai, get it, and grow it carefully. Humans and bonsai live together. I think that is ideal. In today’s era, however, there are quite a few hurdles in the area of raising and living together.

I am devising it, and advocating a special way of enjoying “watching”. For example, Ritz-Carlton customers decorate their rooms with bonsai and love them. You can give the water or leave it to the concierge if it’s stressful.

We collaborate with TIME & STYLE, which deals with furniture and lifestyle goods, and in the Midtown shop, we decorate bonsai along with furniture and tableware with the theme of a fusion of modern lifestyle and traditional Japanese aesthetics. The brand also has its own store in Amsterdam, the Netherlands, and sent about 100 pots of bonsai there.

In addition, I have been taking on new challenges since I was on my behalf, such as displaying bonsai at public transportation facilities such as Haneda Airport.

Tradition and innovation for bonsai itself. How to enjoy bonsai with love culture and appreciation. Without such an approach, the future of the bonsai world is not bright. I can’t raise my case. Mr. Kato is complaining because of such a sense of crisis.
Through collaboration with different industries, we hope that the bonsai will spread further and the stage will rise.